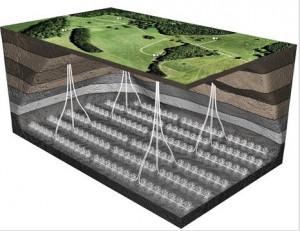 Development of the hydraulic fracturing and horizontal drilling technologies has led to the significant increase of shale gas extracting in the U.S. and brought attention to unconventional natural gas deposits in many countries.

Hydraulic fracturing is a technology of stimulation of natural gas extraction from shale deposits by increasing their permeability and facilitating of the movement of gas to the wellbore.

The technology foresees pumping of special fluids for hydraulic fracturing into the well at a certain pressure and a certain speed in order to stimulate the emergence of cracks and holes in the shale rocks, increasing the shale gas availability.

On the first stage, as in case of traditional extraction of natural gas, vertical wells are drilled. When the well reaches the shale rocks, the direction of drilling is changed to horizontal drilling, executed further through the shale layer. The length of horizontal wells can reach up to 1 km.

At the next step, special perforating gun with an explosives is directed into the well. Initiated explosion generates cracks in the steel casing, cement and shale rocks layer. There could be 8-12 explosions in the single horizontal well during multi-stage fracking.

After the formation of cracks fluid for hydraulic fracturing is pumped into the well under pressure.

Hydraulic fracturing fluid consists mainly of water, some chemicals,  and sand; the later plays the role of propping agent.

Propping agent enters the formed cracks and faults and keeps them open for the release of natural gas contained in the shale layer. After the initiation of cracks and faults in the shale rocks pumping of fluids continues in order to deepen them. The volume of required fluid depends on the geological parameters of shale rock and desired length of the cracks.

Hydraulic fracturing technology is schematically demonstrated on the following video.