Method of hydrofracking has been used in Ukraine since the fifties of the 20 century. Hydrofracking is the general name for the method of mechanical treatment of underground formations, which is used for the extraction of traditional natural gas, shale gas, tight sands gas, oil and coal bed methane. The peculiarities of the hydrofracking technique depend on the goals and locations of its application, and the main characteristics of the method in each particular case are the composition and the volume of substances used as a hydrofracking fluid and proppant. As it is from 21 of November 2012, hydrofracking used during shale gas extraction should not be confused with well stimulation techniques used for the extraction of conventional fossil fuels due to the combination with horizontal drilling and the scale of intervention involved.

In 1958-1962 hydraulic fracturing technology has been . Hydrofracking was mainly used for the injection well completion and in some cases on oil wells. Later, after emergence of more powerful equipment for pumping of the fluid into injection wells and exploration of significant hydrocarbons reserves in Western Siberia the application of hydraulic fracturing has been limited and was renewed only during late eighties and in nineties of 20 century due to significant changes in reserves structure.

Currently in Russian Federation more than 3000 hydraulic fracturing operations are being performed each year according to .

In Ukraine, according to the of the director of Ukrainian Institute of Natural Gases “UkrNDIGas”, Mr. Serhiy Kryvulia, about 60 hydraulic fracturing operations have been performed in 2011, and almost 100 of such operations – in 2012. 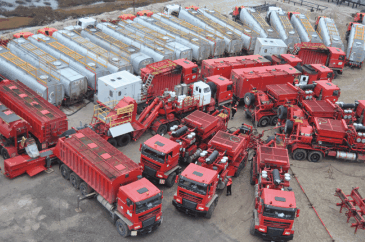 For instance, hydraulic fracturing method is used by the divisions of JSC “Ukrnafta”, which has bought a set of special hydrofracturing equipment produced by company. Starting from 1997 hydraulic fracturing has been performed on the wells of Bytkiv-Babchynske, Lykvynske, Dovbushansko-Bystrycke and Mykulychynske deposits. As for the end of 2011 the company has (10 of which has been performed in 2011). During each hydraulic fracturing operation on average about 6-10 tonnes of quartz sand or ceramic proppant have been pumped into the well for fixation of the cracks. After hydrofracking stimulation of the deposits additional extraction was at the level of 1100-1800 tonnes of oil and 1000-1600 thousand cubic meters of  associated gas per well, while the breakeven point for the application of the technique is achieved after additional extraction of 900 tonnes of oil. In particular, on 15 of December 2011 hydraulic fracturing method has been applied on the well #79 of Lykvynske deposit. During the procedure 94 cubic meters of technological fluid and 16,2 tonnes of ceramic proppant have been pumped into the well. On 21 of March, 2012 the specialists of NGVU “Nadvirnanaftogas” together with the workers of Dolynske backfill division and the specialist of the design institute of JSK “Ukrnafta” have using 17 tonnes of proppant.

During recent years extraction companies, which are active in Ukraine, actively investigate the potential of hydraulic fracturing technology application for the production of nontraditional natural gas.

On 26 of October, 2011 “Kub Gas” company, 70% share of which is owned by Kulczyk Oil Ventures, has of Olgivske field (Lugansk region). The fracture stimulation yielded a test flow rate of 65 thousand cubic meters of gas per day, while before the application of this technology the well with the depth of 2530 meters was not capable of flowing gas from tight formations layer at commercial rates. Hydraulic fracturing has also been applied on the well #8 of Olgivske field in the end of 2011.

Poltavska Hazonaftova Company (JKX Oil) is on well #103 of Rudenkivske field (Poltava region). The depth of the well is 4.59 km and the length of its subhorizontal part, where the 9 stages hydraulic fracturing will be performed, is 1 km. The site preparation works has been completed, additional water wells have been drilled and three large frac-pits constructed. It is 1200 tonnes of proppant, more than 100 tonnes of other substances and more than 4000 cubic meters of water during hydraulic fracturing. On June 2 the company the start of hydraulic fracturing field works, which will last about 40 days. The company characterise this operation as probably the largest onshore frack in Europe to date.

Shell Company within its plans to on the first exploration well Biliaivska-400 after completion of the drilling to designed depth of 5 250 meter, which is expected to take place in next two months. On Yuzivska area there are currently no field operations on well drilling for further application of hydraulic fracturing being performed.

The capabilities of hydraulic fracturing technology have been also studied in Ukraine with respect of its application for coal bed methane extraction. According to the deputy director of the Institute of Gas Engineering Mechanics named after N. S. Poliakov (IGEM) of the NAS of Ukraine, Mr. Vyacheslav Lukinov, such works have been carried out in cooperation with ISD corporation and Alternative Fuels Center of the Ministry of coal industry, however industrial level of extraction .