Major greenhouse gases emissions in shale gas projects include methane emissions during its extraction and transportation (hereafter leakage emissions), and, indirectly, carbon dioxide emissions from the use of energy and power at shale gas extraction (hereafter indirect emissions). Finally, the carbon dioxide is emitted when the natural gas from shale is combusted by its final consumers. Here the methane may (or may not) supplement other energy carriers, e.g. coal or biomass, which have, respectively, higher or lower carbon intensity.

Indirect emissions are subject to the types and amounts of energy applicable to extract the gas. These include, but not limited to, the power (and its sources) at sites for the work of pumps, combusting (and type) of fuel for extraction and transportation of water, sand, waste rock etc. The amount of energy for shale gas extraction, in turn, depends from specific geology conditions and depth of shale gas reserves. Given the fact that the geology conditions for shale gas extraction in Ukraine tend to be more difficult in comparison to those at North America, the indirect carbon emissions at shale gas extraction in the country are likely to be higher than those in the US and Canada.

Leakage emissions at shale gas extraction take place when significant amounts of methane is emitted to the atmosphere along with produced water returning to the surface in the process of hydraulic fracturing. Additionally, methane emissions occur during drill-out of the plugs that separate the different stages of hydraulic fracturing before the start of natural gas extraction.

In the methane emissions at the stage of used water return are estimated in average at the level of 1.6% of the total volume of natural gas that is extracted from the well. Emissions at the stage of drill-out phase are estimated at the level of 0.33% of the volume of gas extracted. Thus, the total methane leakages during shale gas hydraulic fracturing constitute 1.93% of the volume of natural gas to be extracted from the well.

In August, 2013 by the scientists of National Oceanic and Atmospheric Administration and Cooperative Institute for Research in Environmental Science of Colorado university have been published. The researches used mass balance technique and measured the concentration of methane in air masses, which were moving through the territory of shale extraction region, as they moved into the region and flew out. Based on the ,  methane leakages were estimated at the level of  6-12% of all natural gas extracted. Measurements were held in February, 2012 in Utah.

At the same time, according to the , the amount of methane leakage from the execution of hydraulic fracturing is less and and usually constitutes about 0.4% – 0.6%, or, at some fields, up to 0.8% – 1.0% of the total shale gas production. The researchers point out that their estimates are lower because they consider the use of technologies designed for methane capture and flaring.

The example of such technologies’ application is demonstrated by on Barnett shale deposit where the method called green completion of drilling wells is applied. Natural gas that is coming along with the produced water after hydraulic fracturing is separated from water by using special separators and is fed into the pipeline instead of being exposed to the atmosphere or flared. 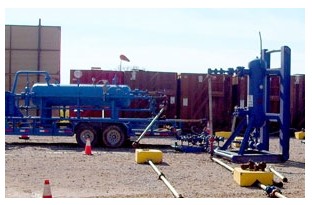 Concluding, the shale gas extraction will be accompanied by carbon emissions into atmosphere. Based on the indicated above percentages of the methane leakages it is already possible to state that the amounts of greenhouse gases emissions into atmosphere during the active phase of shale gas extraction will be measured in millions tonnes of CO2 equivalent per annum. In turn, a part of these emissions may be reconciled due to the fact that the extracted natural gas may supplement of fuels with higher carbon intensity (coal, heavy oil, etc).  Definitely, deeper insight on the theme of carbon emissions at shale gas extraction is necessary in the nearest future, as Ukraine now is in the decision making process on joining the next commitment period of the UNFCCC Kyoto Protocol.