After the capture of settlements at Ukrainian East by terrorist groups the version of some ties between the armed clashes and shale gas deposits likely to be located in Donbass region started to spread actively first in Russian and Ukrainian media and then at electronic social networks and by word of mouth.

What are the volumes of shale gas that could be potentially produced at Ukrainian Donbass in the forthcoming future under peaceful conditions?

Abovementioned estimates, though, have been derived empirically based on general data on the geologic structure of the region and typical gas concentrations for shale and other gas-bearing formations. In turn, real estimates of shale gas deposits could be obtained only after detailed geological exploration works and, in the first turn,  the exploration drilling and the analysis of obtained geologic material. These activities will demand large investment and years of hard work.

Already now one can reasonably conclude that the unconventional gas deposits of Donbass,  confirmed in the course of mentioned geological exploration works would most likely result in significantly lower volumes comparing to current theoretical estimates of potential resources.

Currently, major perspectives of unconventional gas exploration and production in Donbass and neighboring regions are associated with Shell’s projects within the joint activity with state owned Ukrgasproduction and, separately, on Yuzivska unconventional hydrocarbons block. 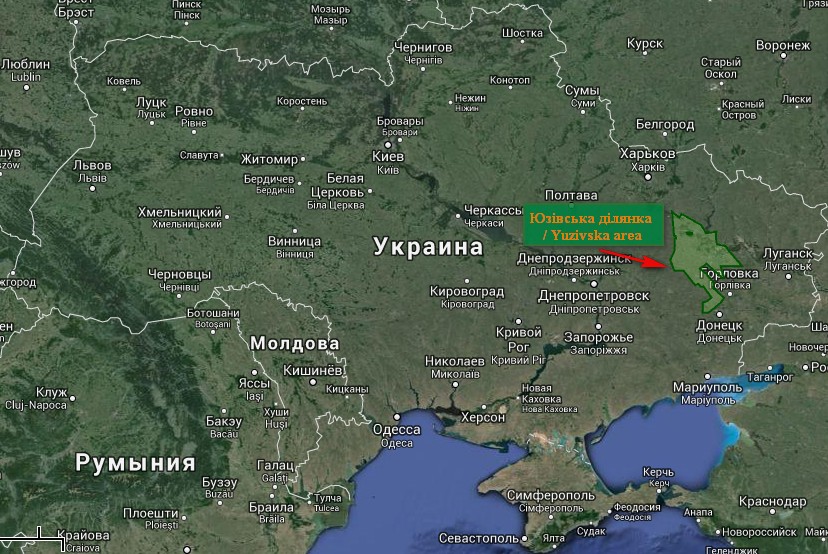 Within the joint activity with PJSC Ukrgasproduction, the agreement for which was signed in September 2011, Shell drilled two exploration wells on tight sand gas on the licensed blocks located near Yuzivska area, however no evidences for the feasibility of commercial gas production has been received so far. Moreover, according to update from the company, the first well will be suspended as it demonstrated unsatisfactory gas production results after the hydrofracking operation. The drilling of the second well has been completed in March, 2014 while the fracking has not yet been performed.

On Yuzivska block, which has the area of 7 886 square kilometers, Shell plans to drill 15 exploration wells during 5 years. The sum of investment at the stage of initial geologic exploration is estimated at the level of USD 410 million. And yet, the success of such activities is far from been guaranteed (as for now, active works on the block have been suspended due to armed clashes at the East of Ukraine).

Thus, in Poland during last seven years more than 50 test wells have been drilled within the geological exploration works for unconventionals; to date, however, no commercial gas flows have been obtained.

Thus, even under the peaceful conditions, it could take at least five years of detailed geological exploration  to (dis)prove the volumes of unconventional gas which may be technically and commercially extracted from the site.

The Rate Of Unconventional Gas Extraction

Yet, even if geological exploration would prove the presence of certain unconventional gas deposits in the region it will take years to scale up commercial natural gas production.

Commercial unconventional gas production depends on the availability and operational efficiency of sophisticated technological equipment (drilling rigs, pump stations, hydrofracking equipment etc.), the, availability of necessary materials skilled personnel, and supportive infrastructure.  The majority of mentioned necessities is missing in Ukraine and may not appear at once.

Hence, the likely commercial production of unconventionals at Ukraine’s Yusivska area would develop gradually, inevitably consuming a lot of time and effort.

Assuming that drilling of one well takes 3 months 20 modern drilling rigs working non stop for 12.5 years are needed to drill a thousand wells. By the way, there are only 147 drilling rigs operating in whole Europe.

Hence, on the near future production of 150 billion cubic meters of shale gas per year and drilling of 80-140 thousand of wells in Ukrainian Donbass cause nothing but surprise. Interestingly, that Russian media that called shale gas a soup bubble and US myth before the start of armed clashed on the East of Ukraine now actively write on huge shale gas reserves on the East of Ukraine, which could not only cover the needs of Ukraine, but also ensure export to European countries.

Unconventional gas extraction costs depend on the following two major factors: amount of investment needed for the drilling  of wells and the wells’  production rate during their general lifetime. According to our calculations, the cost of shale gas production under different scenarios fluctuate in the broad range from USD 139 to USD 1065 per 1000 cubic meters proving the high level of uncertainty. In the averaged scenario (the cost of a well construction is USD 15.8 million and the total production of natural gas is 43,4 million cubic meters) the cost of natural gas could be 365 dollars per 1000 cubic meters, which corresponds to current market prices.

Thus, unconventional gas production on the East of Ukraine will demand USD billions of investment, confirmation of gas deposits during multiyear geological exploration works and the development of the whole unconventional gas extraction industry, including infrastructure, service companies and human resources. Could potential 5 billion cubic meters of natural gas in 2030 costing USD 365 per 1000 cubic meters cause military conflict? In our opinion, the question is rhetorical.