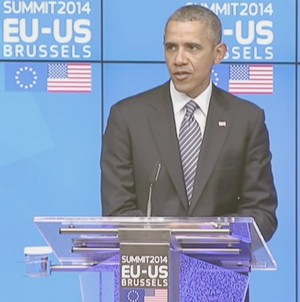 President Barack Obama during on 26 of March based on the outcomes of EU-USA summit declared that broadening transatlantic trade and investment partnership will simplify the export of liquefied natural gas from USA to EU. Concluding trade agreement between USA and EU will allow the simplification of license issuance for export of natural gas to Europe, which is urgently important in current geopolitical situation.

“We’ve already licensed, authorized the export of as much natural gas each day as Europe uses each day. But it’s going into the open market; it’s not targeted directly. It’s going to private companies who get these licenses and they make decisions on the world market about where that energy is going to be sold. The question is whether through our energy ministers and at the highest levels we’re able to find ways in which we can accelerate this process of diversification, and this is something we’re very much committed to.  We think it would be good for Europe.  We think it would be good for the United States”, – President Obama.

The US President declared that export growth could not be achieved over night, but is necessary to start moving in this direction now. This will be one of the assignments for energy ministers of US and EU after the summit.

Barack Obama also stressed that USA and EU are united in their commitment to support Ukraine through economic assistance and bringing additional sanctions against Russia.

In the after the EU-USA summit the parties declared:

“The situation in Ukraine proves the need to reinforce energy security in Europe and we are considering new collaborative efforts to achieve this goal. We welcome the prospect of U.S. LNG exports in the future since additional global supplies will benefit Europe and other strategic partners. We agree on the importance of redoubling transatlantic efforts to support European energy security to further diversify energy sources and suppliers and to allow for reverse natural gas flows to Ukraine from its EU neighbours. We are working together to foster competitive, transparent, secure and sustainable international energy markets”.

Is natural gas from US really able to significantly impact the European market?

According to the last , the country will become net exporter of liquefied natural gas in 2016 and overall net exporter of natural gas in 2018 – two years earlier in comparison to last year forecast. It is expected, that U.S. exports of LNG from new liquefaction capacity are expected to surpass 2 Tcf (56.6 billion cubic meters) by 2020 and increase to 3.5 Tcf (99.1 billion cubic meters) in 2029.

In the long term perspective, natural gas from US could become significant factor on European gas market and compete with Russian natural gas. Together with the growth of domestic production in EU countries, including unconventional gas production in Poland, Great Britain and other countries, development of renewable energy sources and energy efficiency measures this makes realistic the scenario of substantially diminished role of Russian natural gas on European market yet till 2030.