In general, during the last 20 years there were several attempts to start coal bed methane extraction in Ukraine by such companies as Iskander Energy, Industrial Union of Donbass corporation, LLC “CarbonaEnergo”, LLC “Ecomethane”, etc. In total, about 10 hydrofracking operations were performed, but the wells did not provide commercially viable gas flows.

High density and low permeability of coal seams and surrounding strata (permeability of sandstones is <0,1 mD and their porosity is 5-6 %), as well as low thickness and high depth of coal seams deposits make the realization of such projects more complicated demanding application of modern hydrofracking technologies adapted to specific geological conditions. Simultaneously, the need to use private land sites for drilling and the risk of their contamination impede the receipt of the projects approval from local residents.According to , the First Deputy Director of LLC “Nadra Integrated Solutions”, the recoverable resources of coal seam methane equal to 213-340 billion cubic meters, and till 2030 annual production rate could reach up to 10 billion cubic meters.

In the opinion of ,  Director General of the State Regional Geological Enterprise “Donetskgeology”, the volume of coal seam methane production till 2030 could reach 5 billion cubic meters per annum. About 5000 wells with the depth from 750 to 1030 meters should be drilled till 2030 to reach such production level. The authors of updated Energy Strategy of Ukraine are even more pessimistic: in their forecast the annual production of the coal bed methane in 2030 may reach 1-3 billion cubic meters.

The practical execution of the coal bed methane extraction projects will depend on the involvement of modern technologies, attraction of investments and expertise of world’s major energy companies. Notwithstanding that dozens of licenses on exploration and even extraction of coal bed methane have been already issued by Ukrainian authorities, the execution of the large scale projects is not very likely in the short term period. The reasons of such pessimistic look are the lack of advantageous regulatory framework, high investment and production costs, coupled with low investment attractiveness of Ukraine.

On the other side, coal mine methane is the methane, which is emitted during coal extraction at existing coal mines. In this case, methane brings danger for coal miners due to the risk of self explosion of air-methane mixture. Complex ventilation and degasification systems are built at many coal mines for methane emissions control; they capture coal mine methane and transport it to the surface and outside the coal mine faces. The concentration of methane in the air-methane mixture ranges from 0.5% in mines’ ventilation systems to 25% and more in degasification systems. Degasification wells are, usually, horizontal or directed; however drilling of vertical degasification wells from the surface with the aim of pre-mining degasation of coal seams is also possible. In this case the concentration of produced methane could reach 90% and more. At the same time, degasification of the worked out space of active production faces using vertical wells from the surface is also practiced at some mines to avoid the risk of explosion and the migration of the methane to the active sections of the coal mines.

According to the , 1.4 billion cubic meters of methane were emitted in 2012, while the general coal production reached 85.7 million tonnes. The major part of methane was emitted into the atmosphere through the ventilation systems of coal mines and only 370 million cubic meters were captured by the degasification systems present at only 44 mines out of 155. Moreover, only 43% of the captured methane was further utilized for heat and/or electricity generation or flared, while the rest was emitted into the atmosphere as well. This is explained by the fact, that only at 18 mines the concentration of the methane in the air-methane mixture of the degasification systems exceeded 25%, whereas the use of air-methane mixture with lower concentration of methane is prohibited according to safety rules. 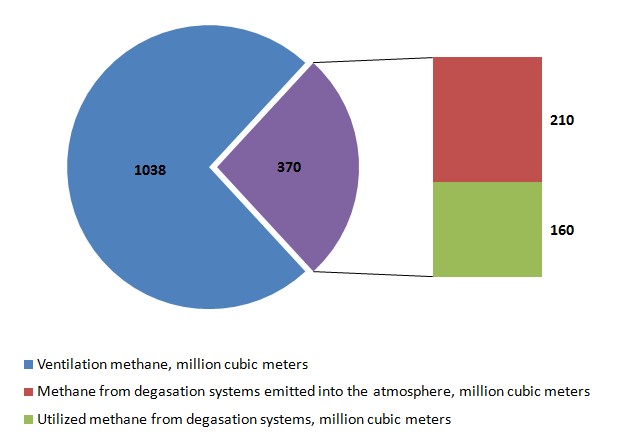 Utilization of coal mine methane in 2012

According to DonetskSteel representative Yevgen Yushkov, the Coal Company Pokrovs’ke applies the sophisticated recurring degasification system for the compliance with the mine workers safety rules. The system includes the wells drilled from the surface as an additional measure for degasification of worked out space of working faces. The construction of wells from the surface is performed using modern drilling equipment. The forecasted volume of the methane capture equals to 40 million cubic meters per year, including 8 million cubic meters per year using the wells from the surface. The utilization of the coal mine methane allowed generation of 22.2 million kWh of electricity and 20 845 Gkal of heat energy in 2012. As for the application of pre-mining methane degasification (drainage) currently only the research and investigative activities are being held.

The representative of the Technical Development Department of DTEK Sergiy Egorov points on the technological barriers of coal bed methane extraction from coal seams of DTEK coal mines. The major challenge is the high density and low porosity of the coal seams, which was confirmed by research of American company ARI.

The capture of the ventilation methane has been so far not feasible, because the relevant technological solutions are currently at the testing stage with no successful examples of their effective and long-term operation worldwide.

At the same time, DTEK investigates the possibility of applying the recurring degasification of worked out space of working faces of their mines with the use of vertical wells from the surface.

In general, the perspectives of the coal mine methane in Ukraine depend on future volumes of coal extraction, modernization of degasification systems, introduction of the ventilation methane utilization technologies and the improvement of legislative base; all the more in part of related legislation improvement in Ukraine a lot should be done.

On December 10, 2013 a seminar titled «Extraction and utilization of coal mine methane: perspectives for development” took place in Kiev. The event was organized by Committee on Fuel and Energy Complex, Nuclear Policy and Nuclear Safety of Verkhovna Rada of Ukraine in cooperation with US Environmental Protection Agency. During the seminar the main attention was paid specifically to the regulatory and legislative barriers for coal mine methane utilization.

The norms of the existing Tax Code predetermine the payment of the mineral tax for the use coal seam methane at the same level as is paid at traditional natural gas production. In the opinion of the participants of the seminar, such situation negatively impacts the economic efficiency of CBM/CMM projects and restrains useful utilization of the gas. According to Sergiy Egorov from DTEK, these norms of Tax Code forced the company to suspend the projects foreseeing construction of cogeneration units fuelled by coal mine methane. The only realistic source of revenues for such projects is the possibility of electricity generation and stemming savings due to lower volumes of electricity purchased from the grid.

In order to stimulate coal seam methane extraction Mykola Zhykaliak proposes to define by law the degasification methane from coal seams of mine fields as well as from operating and abandoned coal mines as an alternative energy source. Besides, Mykola Zhykaliak noted the necessity of excluding the absorbed coal seam methane gas, captured during recurring and pre-mining degasation of coal mines, coal fields and abandoned mines, regardless the further use of captured gas, from the tax base for mineral tax (subsoil resources use tax).

The similar proposal is contained in  authored by members of parliament Koval, Myrnyi, and Baysarov. In particular, the draft proposes to introduce mineral tax for coal seam gas (methane) extracted during degasation of coal fields from coal beds, associated strata and subsurface pores at the level of 1.25 percent of average customs cost of such hydrocarbon resource (natural gas). In other words, the draft law proposes to significantly reduce the tax rate, because currently coal mine methane is taxed by the tax rate for natural gas, which is according to article 263.9.1 of Tax Code of Ukraine equals to 20% of extracted minerals costs. Ifthe methane is not utilized and emitted into the atmosphere, it is proposed to tax it by ecological tax for emissions into atmospheric air using tax rate of 1.75% of average customs costs of hydrocarbon resource if the concentration of methane is lower than 25%, 3% of average customs cost if the concentration of methane ranges from 25% till 35% and 5% if the concentration of methane is higher than 35%.

Therefore, the extraction of coal seam methane has high potential in Ukraine; however its practical realization demands the introduction of state support measures for such projects as well as the attraction of leading world companies with modern extraction technologies. Pre-mining degasification of coal beds could not only increase national production of natural gas, but also support strengthening of coal extraction safety and lowering methane emissions into the atmosphere from such activities.