The price for natural gas, supplied by Gazprom to Naftogas, will be agreed on a quarterly basis starting from 2014till 2019 and could constitute either USD 268.5 or USD 400 or higher per 1000 m3 – these are the results of the negotiations between President Yanukovich and President Putin held on 17th of December, 2013. Negotiations about the future of Ukrainian gas transportation system and the establishment of bilateral gas transportation consortium will be started in the nearest future, to foster the long term cooperation in oil and gas industry of Ukraine, as declared by Gazprom.

How could these changes in oil and gas sector of Ukraine impact the development of unconventional gas extraction projects and creation of the competitive gas market in the country?

It is the case that a number of unconventional hydrocarbons exploration and extraction projects have been launched in Ukraine in 2013. In addition, considerable progress has been made in allowing the import of natural gas from Europe to Ukraine. Joint activities of the Ministry of Energy and Coal Industry and the Ministry of Environment headed by Mr. Stavitsky and Mr. Proskuriakov respectively, have resulted in signing of several product sharing agreements (hereafter PSA) for hydrocarbon extraction with major international oil and gas companies including Shell, Chevron, ENI, EDF. In addition, Stavitsky-Proskuriakov team has come very close to sign PSA with ExxonMobil and unblock PSA with Vanko Prykerchenska.

Main data on these activities are presented in the table below: 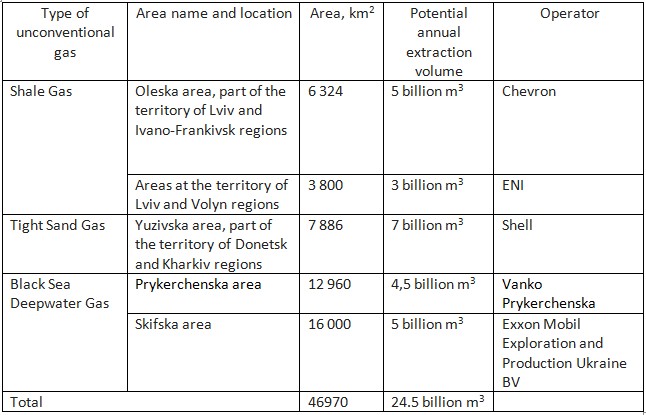 In total, exploration and further extraction of hydrocarbons could take place at the territory of 47 thousand square kilometers and the annual natural gas production volume from these areas could reach 24.5 billion cubic meters already in 2030.

Currently there are a number of estimates regarding the unconventional gas resource base for all major unconventional hydrocarbons basins in Ukraine. According to different sources, technically recoverable onshore unconventional gas deposits have been estimated at the level from 1 to 3.6 trillion cubic meters. The perspectives of Ukrainian unconventional hydrocarbons areas both onshore and in the Black Sea also could be supported by the very fact of signing PSAs by major international oil and gas companies, which have committed to invest hundreds of millions of dollars in comprehensive geological exploration and drilling the dozens of exploration wells in the territories. Moreover, some project sharing agreements’ drafts foresee bonuses to be paid to the state budget of Ukraine; thus, the draft PSA between Ukrainian government and the consortium of companies lead by ExxonMobil foresees the payment of USD 325 million to the state budget right after the signing of the agreement.

In addition, the likely presence of the significant reserves of unconventional gas in Ukraine is confirmed by the positive results of exploration/extraction of such gas, obtained recently at the nearby areas both onshore and offshore. As for the deepwater shelf the same ExxonMobil conducts active exploration of hydrocarbons at Neptun block in Romanian part of Black Sea, in the close proximity to Skifska area. As for the onshore unconventional gas, Poltavska Oil and Gas Company has recently obtained initial production rate at the level of 85 thousand cubic meters of natural gas per day after fracturing Rudenkivska-103 well (Poltava region), where the geological conditions could be comparable with the conditions at Yuzivska area.

According to , international oil and gas companies estimate production costs of the unconventional natural gas at the level of USD 250-270 per 1000 m3. Nonetheless, a lot depends from local geological conditions and resulted well production rates. Besides, a large share of investment corresponds to drilling and fracturing costs, environmental protection measures, as well as the economy of scale, i.e. the rate and speed of the development at certain areas.

Overall, the analysis of data on onshore unconventional gas production costs, in particular those made on the request of European Commission, allows to assert, all other conditions being equal, that the production costs in the most likely scenario will be equal to USD 273 per 1000 m3, which in general corresponds to the numbers declared by the Minister.

It is also worth mentioning that the commercial production of unconventional gas in Ukraine in considerable volumes could start not earlier than in 4-5 years from now, after the completion of the exploration works. Till that time new less expensive industrial technologies for unconventional gas extraction could emerge.

Thus, current considerable production costs for unconventional gas do not bring any fatal risks for the development of unconventional gas extraction projects in Ukraine. The price of USD 268.5 per 1000 m3mentioned in the latest agreements between Gasprom and Naftogas is, in essence, only a declaration of intent, while its quarterly confirmation is likely to happen only in the short term period (year or year and a half maximum).

The appetites of the agreement counterparts, the activities of the third parties, and the market pressure (current spot price in EU is close to USD 400 per 1000 m3) will continuously push the price for gas for Ukraine to its higher edge. Finally, even if the price of natural gas for Ukraine will survive at the level of USD 268.5 in the long run, the parties of unconventional gas projects will be able to export this gas to EU at commercial prices using national gas transportation system. On the condition, of course, that this gas transportation system will be available for the unconventional gas.

Possible control over the gas transportation system of Ukraine by Gazprom could bring sufficient risks to the unhampered access to this transportation system for unconventional gas, particularly in case of withdrawal of Ukraine from EU Third Energy Package. Such pace of developments could lead to both the pressing of the international oil and gas companies to withdraw from unconventional gas extraction projects in Ukraine and also to the reformatting of PSAs with the inclusion of Gasprom or its affiliated companies in the PSAs.

As a result, one may expect a sabotagein terms of the connection of the unconventional gas pipelines to the gas transportation system or the refusal from the gas intake due to “technical” reasons etc. The “help” from controlling authorities and courts in this regard also could not be excluded.

Despite PSAs with International Oil and Gas Companies either do not contain the clauses on their termination on the initiative of Ukraine or contain rather weak clauses in this regard, the possibilities of a state to push the investors to leave the unconventional gas projects remain and could be effective. Moreover, the public opinion in Ukraine does not always support the development of unconventional gas projects, while the campaign against such activities continues.

Under such development of the situation one should not exclude the choice of possible cooperation between international oil and gas companies and Gazprom in Ukrainian unconventional gas projects.

All acting PSA on unconventional hydrocarbons in Ukraine available in public domain are three lateral: besides the Ukrainian State and IOGC – the investor in exploration and extraction of the hydrocarbons, there is one more Party – a limited liability company (hereafter ‘First LLC’) founded by state company “Nadra of Ukraine” (90 % of capital) and byyet another independent LLC (hereafter ‘Second LLC’ with remaining 10 % of capital). The first LLC – the party to PSA – has the obligations to invest in the extraction of the hydrocarbons.

Even today it is not clear how First LLC could finance its obligations regarding the hydrocarbon extraction activities, likely amounted to UAH billions, when its statutory capital is negligible in comparison to the needed investment. Gazprom, in turn, could be capable to ensure the necessary funds.

Technically, for Gazprom or any other third party it could be enough to get the control over the second LLC and increase the share of capital of the later in the first LLC, under the silent agreement of Nadra of Ukraine.

Through the execution of such scenario Gazprom, in fact, could become the actual partner of international oil and gas companies in PSAs, despite the PSA clauses regarding the necessity of agreeing the change in ownership in the first LLC.

What a surprise could that be to a Ukrainian public taking into account the fact that the necessity to ensure the energy independence of Ukraine has been the major argument in favor of agreeing the PSAs on unconventional gas by the local councils of Kharkiv, Donetsk, Ivano-Frankivsk and Lviv oblasts!

The next day after the Moscow deal between Naftogas and Gazprom regarding the possible new natural gas price at the level of USD 268.5 per 1000 m3, Minister Stavitsky that this agreement will not influence the unconventional gas projects’ development in Ukraine.

Indeed, as such this letter of intentdoes not bear considerable risks to unconventional gas projects  in Ukraine.

In contrary, losing control over the gas transportation system of Ukraine in Gazprom’s favor may have unpredictable consequences for the development of unconventional gas projects in the country and very likely to complicate to the maximum extend the creation of competitivegas market with many participants in the country.

President Yanukovich, by the way, during his press conference on December 19th, 2013, that Ukraine is ready to negotiate the three lateralconsortium regarding the management of Ukrainian gas transportation system.

It is only left to wish to the Minister Stavitsky and his partners in the Cabinet of Ministers of Ukraine and Naftogas of Ukraine health and firmness in the coming year;  these will be absolutely necessary for the protection of national interests of Ukraine in oil and gas sector in their negotiations on natural gas price with their Gazprom counterparts in every quarter of 2014.