During extraction of shale gas significant amounts of fluid consisting primarily of water, sand and chemicals are used for hydraulic fracturing. After its completion the pumped water partially returns to the surface through the wellhole. The returned produced water contains some amounts of the natural water from the shale layer, dissolved elements of rock and substances used during the drilling process. Content of solids and salts in the produced water depends on specific geological conditions.

Part of the injected fracturing fluid remains deeply in the shale rocks layer and cracks formed in the result of hydraulic fracturing.

The main methods of produced water management include its pumping into special disposal wells, treatment and discharge to surface water bodies and reuse.

In the case of use of disposal wells the water is pumped in porous rocks at a depth of hundreds of meters that have to be separated from aquifers and groundwater reservoirs by watertight rocks, the thickness of layers of which reaching, again, hundreds of meters. Underground disposal of the return water is not possible on each site of shale gas extraction; therefore fluids sometimes are transported to equipped disposal wells. According, this method of the return water disposal is the most common and the cheapest. Nevertheless, the use of disposal wells may be limited in areas which have a high level of seismic activity. 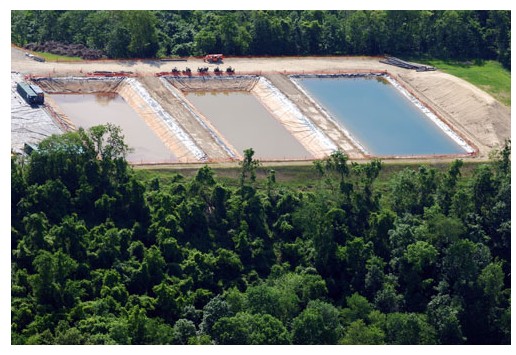 Return water can be treated directly at the site of extraction, but more often with the use of existing municipal or commercial water treatment plants, if there are any in the area of shale gas extraction, and if such plants have possibilities for treatment of produced water.

Reuse of produced water for hydraulic fracturing or other purposes (eg. for irrigation) also requires pre-treatment directly at the site of extraction or outside the site. Reuse of return waters are actively developed on areas without disposal wells, and where the quality of return water makes it possible and feasible to clean it to the necessary parameters.