The 5th Adam Smith Ukrainian Energy Forum was opened in Kyiv on the 24 of June. During the first session the main attention was focused on national priorities in reforming energy sector and on gas sector reforms in particular.

Oleksandr Todiychuk, Deputy Head of National Joint Company “Naftogas of Ukraine”, opened the session and stated, that as never before the safety of Ukraine depends on its energy security. According to Mr. Todiychuk, Ukraine while preparing for the next winter season considers three different scenarios: supply of natural gas from Russia under agreed price, ensuring only transit transportation of natural gas to European countries and complete stoppage of gas supply from Russia.

Deputy Minister of Energy and Coal Industry of Ukraine Vadym Ulyda also underlined, that today Ukraine is forced to work under emergency conditions of military, information and energy war.

The Head of Shell in Ukraine Graham Tiley stated, that notwithstanding the hard times for Ukraine our country has all chances to implement energy sector reforms. Graham Tiley emphasized the importance of ensuring the reliable and competitive energy supply, as well as environmental and health protection and new jobs creation.

In the opinion of Shell, natural gas in the forthcoming future will play the main role in ensuring reliable, competitive, affordable and sustainable energy supply not only in Ukraine, but worldwide. Increase of national natural gas production in Ukraine will demand investment, technology and experience of both Ukrainian and international oil and gas companies, as well as clear regulatory base, which will satisfy the needs of investors and society. Graham Tiley positively estimated the initial steps in reforming Ukrainian legislative base and stated that they are looking forward for the updated versions of Subsoil Code off Ukraine, Rules on Oil and Gas Fields Development, amendments to the land legislation and liberalization of geologic information export procedures. 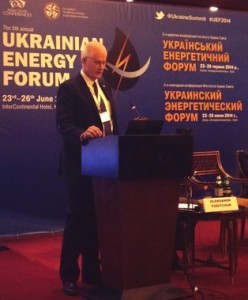 The Head of Chevron in Ukraine Peter Clark underlined, that the PSA signed for the development of Oleska area is very important for the company as it provides stability and predictability for long term investment of financial resources, technologies and human resources. However, Peter Clark stated that Chevron still continues negotiations with the Government of Ukraine and LLC Nadra Oleska on operational agreement, which will allow the commencement of the project on Oleska area.

Director General and Head of the Board of DTEK Maksym Tymchenko, commenting on the perspectives of gas sector development stressed the importance of domestic natural production growth and reduction of natural gas consumption due to introduction of modern technologies. Maksym Tymchenko provided the example of Naftohazvydobuvannia company (DTEK’s subsidiary), which obtained some good results on intensification of natural gas production in Poltava region. According to DTEK’s estimation, the use of comparatively low cost methods of natural gas production intensification could lead to the growth of national natural gas extraction in Ukraine by 4-4.5 billion cubic meters in just two years, and could afford to cover the whole natural gas demand by domestic supply in the mid-term perspective not waiting for shale gas revolution in Ukraine.

The participants of the conference noting the very difficult current situation in gas supply sector of Ukraine were positive about future perspectives of natural gas production growth both from conventional and unconventional sources.

UEF 2014: 7 key messages on the development of gas sector in Ukraine