Large scale unconventional gas extraction projects have significant impact on the environment, in particular in terms of groundwater contamination, extensive water resources consumption, greenhouse gases emissions, landscape and land sites impact etc. Hence, the important task during initial phases of unconventional gas projects development is the introduction of continuous environmental monitoring system, primarily on water resources and ground, and localization of territories, where wells drilling and fracking would lead to the high danger for the environment and people.

These tasks to the full extent are important for Oleska area of unconventional hydrocarbons extraction, which is located in highly populated territories of Ivano-Frankivsk and Lviv regions. As reported, the agreement of the Product Sharing Agreement for this acreage (the total area is 6 324 square kilometers) by regional councils of above mentioned regions was accompanied by the public protests. According to preliminary estimates, in case of commercial extraction of unconventional hydrocarbons the number of wells at this area could reach a one thousand and above.

The parties of Product Sharing Agreement between the state of Ukraine, Chevron Ukraine B.V. and LLC “Nadra Oleska” acknowledge the importance and relevance of environmental protection issues at Oleska area. In particular, the section 36 of the Agreement contains obligations on conducting initial and periodic analysis of shale gas extraction activity impact on surface water sites and groundwater as well as obligations on the assessment and minimization of environmental risks. At the same time, detailed methods and the scope of environmental monitoring are not outlined in the agreement and will be defined during its execution with the consideration of legislative requirements and internal standards and practices of Chevron company (project operator).

Without exaggeration, the base for the efficient environmental monitoring in this case is the detailed investigation of geological conditions and peculiarities of Oleska area, primarily with regard to underground and surface waters providing regional water supply.  Hence, it is essential to develop hydrogeoenvironmental underground and surface waters monitoring system, which will collect, analyse, prepare, store, and transfer information on groundwater conditions, forecast their changes (both under natural and anthropogenic factors) and develop scientifically substantiated recommendations for unconventional hydrocarbons exploration and extraction. 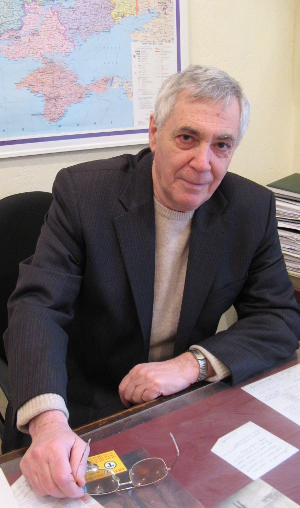 These and other issues are discussed below in the interview with the Head of Geoecology and Exploration Research Department of Institute of Geological Science of National Academy of Science of Ukraine Mr. Igor Bagriy, PhD in geological science.

Mr. Bagriy, which factors of potential environmental impact from shale gas extraction are the most significant and dangerous in your opinion?

In my opinion, the most important factor is the potential contamination of ground waters, especially near the water supply intake zones, both underground and surface.

It is important to underline, that Oleska area has complicated tectonical and geodynamical conditions. In particular, one should consider the presence of tectonic dislocations of different types and associated fractures, permeability and tectonic fragmentation zones within the Oleska area. Large scale hydrofracking operations within such zones provide conditions for gas and contaminating chemicals penetration into the above located water horizons and on the surface (ground contamination, ground and surface water contamination, general increase of methane emissions).

How well is Oleska area explored in terms of geology, tectonics, tectonical faults and fractures? What experience does the Institute of Geological Science have in the area of subsurface resources exploration of the territories included in Oleska area?

Oleska area is well explored in terms of geological and geodynamic conditions and hydrological regime. Institute of Geological Science of NAS of Ukraine has significant experience in subsurface resources exploration at the territories, which were included in Oleska area; during last ten years our scientists were working on the issues of water supply from surface and groundwater resources for Lviv, Ivano-Frankivsk and district centers of the region. Within these activities aerospace, hydrological, geochemical and geological structural investigations were performed and morphostructural peculiarities of the territories were defined. Besides, the zones of potential interconnection of underground and surface water, including high permeability faults zones, which are located near the underground and surface water, were explored. These investigations allowed defining zones of intensive interconnection between underground and surface waters, which are shown at the picture. 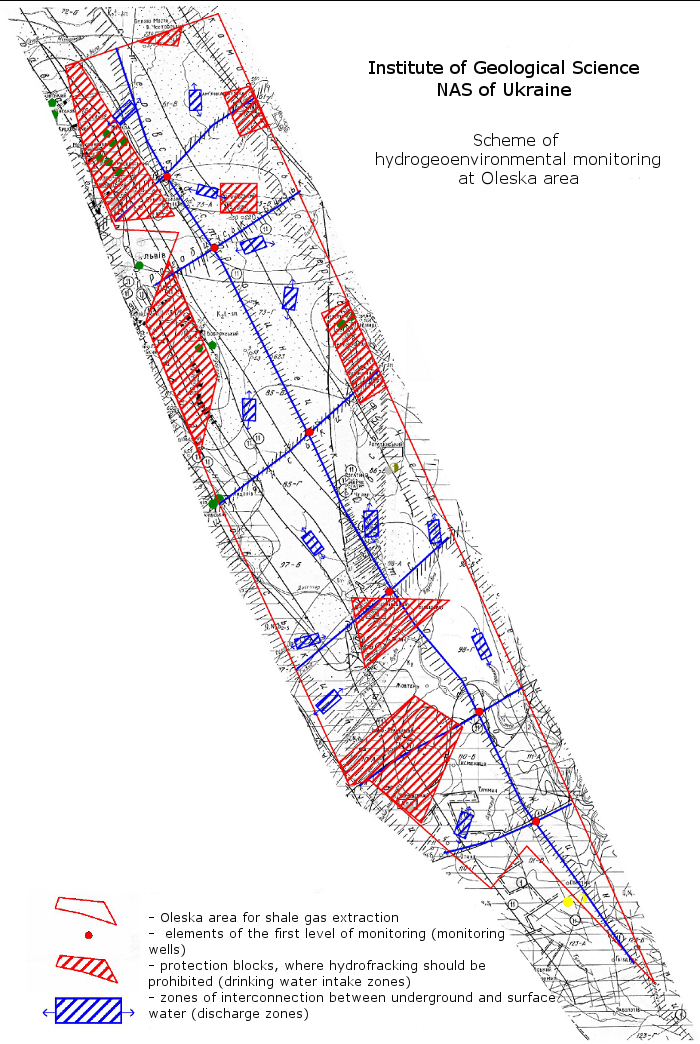 Besides, such works performed by the Institute helped to define and map sites, where the application of hydrofracking technology during shale gas extraction could cause increased environmental danger. Such danger is connected primary with the risk of fracking fluid penetration into natural permeable tectonic zones and channels, through which technological fluid and natural gas can reach higher water horizons and the surface.

In your opinion, which further steps and investigations are needed in this direction?

Abovementioned outcomes of the research performed by the Institute of Geological Science could be used for the development of the future environmental monitoring system. Such system should definitely include further research on seismic monitoring, hydrogeochemical monitoring of artesian and underground water, mapping of active tectonical faults zones, defining anomalistic concentration of methane, helium and radon in the nearby surface blocks etc. Based on such research complex the criteria for evaluation of environmental risks of unconventional gas extraction should be developed.

On the first stage scientists propose performing the following investigations:

1)      Further definition and mapping of most environmentally dangerous zones and sites (fractures, gas penetration channels etc.), which are associated with natural deconsolidation of minerals to the high depth, based on the materials of aero space pictures and also using Rn, Tn, He, H, CO2 and other geochemical methods of ground analysis;

2)      evaluation of parameters of dangerous zones and sites, their classification and zoning based on danger level;

3)      further definition and confirmation of the size of protected blocks, which should be kept safe from hydrofracking application;

6)      development of automatic base of hydrogeoecological information, especially for the zones near drinking water intake sites;

7)      modeling of hydrogeological conditions and processes.

In your view, what could be the practical benefits from the introduction of hydrogeomonitoring system for the residents of Oleska area? How fast could such a system be developed?

The development of hydrogeomonitoring system with the use of monitoring wells near fault zones and water intake zones will help minimizing the risk of the ground water pollution and its early detection. Taking into account the work and performed studies of the Institute of Geological Science of Ukraine such monitoring system for Oleska area could be developed during two years.

I would remind, that we have already prepared recommendations for the detection of tectonical faults and other natural channels for degasation and migration, evaluation of their permeability under natural circumstances and definition of the protection areas, where no natural gas extraction activities should be held (water intake systems, cities agglomerations). The main attention during such investigations should be focused on river valleys, which are usually located above the faults and decompaction zones (deep degasation zones), and also zones of ascending discharge of deep laying  groundwaters with high mineralization.

Finally, it is worth mentioning that similar studies with gathering of geologic, tectonical and hydrogeological file materials should be developed and performed for other areas of potential unconventional gas extraction, namely for the licensed areas of ENI in Lviv and Volyn region, Yuzivska area in Kharkiv and Donetsk region etc.