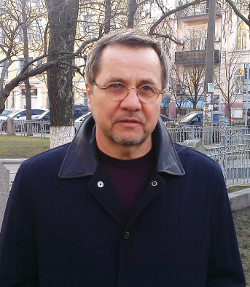 State company “Chornomornaftogas” and all its assets including drilling rigs, vessels and exploration rights could be transferred to Russian Gazprom as a structural division. Such claim was made by Volodymyr Plechun, the first deputy Chairman of the Board of “Chornomornaftogas” in his comment to “Unconventional Gas in Ukraine” informational project.

Russian military has already occupied and currently controls gas pumping station located 1 kilometer to the south of Strilkove village of Kherson region of Ukraine. This gas pumping station transports natural gas from the gas field in Azov sea near Kherson region to Crimea. At the same time, Russian troops have landed on the drilling rigs of Chornomornaftogas, including the drilling platform, which produces hydrocarbons from Odeske field located at the shelf near Odessa region.

Currently the operational control over the enterprise is performed by Mykola Harytonov, who was appointed by the Ministry Council of Autonomous Republic of Crimea. Before the appointment, Mykola Harytonov was the head of natural gas production department of “Chornomornaftogas”. It is important to note that according to Ukrainian legislation only general meeting of shareholders could change the head of the company and the only shareholder of Chornomornaftogas is “Naftogas” state company .

According to Mr. Plechun, during the introduction of Mykola Harytonov in Chornomornaftogas office held on 13 of March, the vice prime minister of ARC Rustam Temirgaliev stated, that he personally does not treat this appointment as legitimate, but political necessity forces the government of Crimea to change the management of Chornomornaftogas.

“The enterprise will be nationalized in the nearest time. After the referendum, which will prove the desire of Crimean people to join Russia – they are sure about that – the enterprise will receive special licenses for the shelf development in Crimea, and after that will be transferred as a structural division to state company Gazprom”, – retells the words of Mr. Temirgaliev Volodymyr Plechun.

Volodymyr Plechun was shocked by such declarations considering this as a gift to Gazprom in form of state property and natural resources. Chornomornaftogas owns 4 drilling platforms, thousand of kilometers of gas pipelines, underwater and onshore infrastructure, which was developed using tax payers money from all Ukrainian regions.

Current technological operations of the company, including natural gas production, is performed in a regular regime.

Volodymyr Plechun stressed on the passive position of “Naftogas” management on the issue of avoidance of potential loss of operational control at Chornomornaftogas.

“We have beet trying to reach the management of “Naftogas” all the time”, – stated Mr. Plechun. – “However the management was always busy, and Mr. Bakulin was not available for the phone conversation, and the letters sent to him were left without any answer”.

Volodymyr Plechun was of the opinion that nothing has been done by ”Naftogas” to save the state property.

On the 17 of March, the parliament of Crimea, which has already been dissolved by the decision of the Parliament of Ukraine from the 15 of March, adopted a resolution on energy safety of Crimea. According to the resolution all property rights of Chornomornaftogas is transferred to Republic of Crimea.