On Friday, September 12, EU and USA entered into force additional round of sanctions against Russia. New sanctions include restrictive measures targeting the largest Russian oil and gas companies.

However, such prohibitions will not apply to the execution of an obligation arising from a contract or a framework agreement concluded before 12 September 2014 or ancillary contracts necessary for the execution of such contracts.

Besides, the prohibition shall not apply where the services in question are necessary for the urgent prevention or mitigation of an event likely to have a serious and significant impact on human health and safety or the environment.

Sanctions of the European Union also include the prohibition for providing investment services for the largest Russian oil and gas companies, namely Rosneft, Transneft, Gazpromneft. The restrictions cover investment services for or assistance in the issuance of transferable securities and money-market instruments with a maturity exceeding 30 days, issued after 12 September 2014.

US against oil and gas companies Transneft, Gazpromneft, Lukoil, Gazprom and Surgutneftegas. Sanctions against Rosneft were introduced earlier.

According to the directive of OFAC, the provision, exportation, or reexportation of goods, services (except for financial services), or technology in support of exploration or production for deepwater, Arctic offshore, or shale projects that have the potential to produce oil in the Russian Federation, or in maritime area claimed by the Russian Federation and extending from its territory for all american companies. The prohibition on the exportation of services , for example, drilling services, geophysical services, geological services, logistical services, management services, modeling capabilities, and mapping technologies. The previous round of sanction targeted export of the equipment, but not the provision of services for oil exploration.

US sanctions target not only future projects and transactions, but also existing project of US companies in Russian Federation.

The prohibitions do not apply to gas projects, however in case if the project produce gas AND oil from deepwater, Arctic offshore, or shale formations, then it is covered by the sanctions.

US sanctions also foresee the prohibitions of providing financial support or loans for the listed Russian oil and gas companies for the period longer than 90 days.

Additional sanctions enforced by EU and US could make the realization of announced large oil extraction project in Russia more complicated due to the lack of domestic financial and technological resources. Such promising developments like joint project of ExxonMobil and Rosneft on Arctic shelf, joint projects of BP and Rosneft and Shell and Gaspromneft for shale oil extraction could also suffer from the applied restrictive measures.

One of the largest of such projects under threat is the joint activity of ExxonMobil and Rosneft on the Cara Sea. On 9 of August, 2014 joint enterprise Carmorneftegas  the first exploration well Universytetska-1, which could become the most northern oil well in Russian Federation. The area of the Universytetska structure is 1200 square kilometers and its resources are estimated at the level of 1.3 billion tonnes of oil equivalent. The drilling is performed by West Alpha drilling platform owned by Norvegian North Atlantic Drilling company. The drilling of the well was scheduled to be completed in two months. 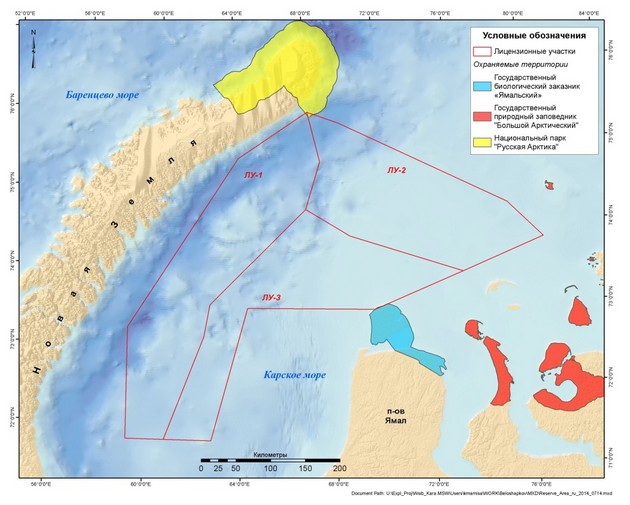 The lawyers of oil and gas companies will thoroughly study the potential consequences of the announced sanctions against Russian companies, however of the promising projects’ development is high. The drilling of Universytetska-1 well  halfway by 26 of September.

US Office of Foreign Assets Control in his stipulated, that activities under the existing contracts, which fall under sanctions, shall be winded out before 12:01 a.m. eastern daylight time, September 26, 2014 (7 a.m. Kyiv time).

Strengthening of the restriction measures was put into effect at a time of falling oil prices. On September 15, the Brent oil was traded  (-10% during last 6 months), reaching the lowest level for the last to years. The price for Urals oil, which is used as a benchmark for Russian oil export, 94.1 US dollars per barrel as for September, 14. Lower oil prices could additionally decrease the investment feasibility of oil extraction projects in Russia.