Signing the agreement on hydrocarbons extraction on Skifska Area of the Black Sea could straightaway add USD 325 million to the state budget of Ukraine and increase mid and long term national natural gas production by 5-10 billion cubic meters per year. Negotiations with the world’s major oil and gas companies led by ExxonMobil have been held during more than a year already; however, this ambitious and promising agreement has not yet been executed by the respectful parties.

Skifska Area is located within the boundaries of the continental shelf of the Black Sea and covers the territory of 16 698.2 square kilometers while its depth reaches 300-2000 meters. The licensed area includes all sedimentary deposits located within its perimeter and is limited by the depth of 10 thousand meters from the surface or by geological basement (whatever comes first). 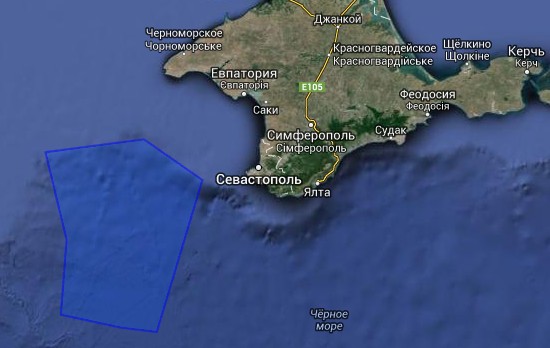 The tender on the right to sign the products sharing agreement (hereafter PSA) on the Skifska Area hydrocarbons  back in May, 2012.The conditions of the tender foresaw, among other requirements, the obligations of the investor to conduct geological exploration at the Skifska Area, including 3D seismic investigation and drilling at least one exploration well during the first stage of geological exploration works, to be completed no later than during 5 years.

On August 13th, 2012 the of the tender on the right to sign the PSA for the Skifska Area hydrocarbons. The priority right was granted to the consortium of companies led by Exxon Mobil Exploration and Production Ukraine B.V. (Netherlands) – the subsidiary of Exxon Mobil Corporation (USA). The consortium has also included Shell Exploration and Production B.V. (Netherlands) – subsidiary of Royal Dutch Shell plc (Great Britain), OMV Petrom (Romania) as well as public joint stock company Nadra Ukraine. The only competitor of the consortium in the tender was Lukoil Overseas Ukraine B.V.

According to the conditions of the tender the minimal amount of the special payment to the state budget to be transferred by the investor during 10 days after the PSA’s signing (the bonus for the signing to be paid to the state budget of Ukraine) had to be not less than UAH 2.4 billion. ExxonMobil proposed in its bid even slightly higher sum equal to USD 325 million (UAH 2.6 billion). 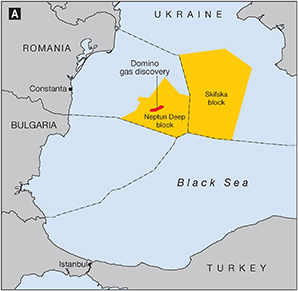 Neptun block and Skifska Area are located next to each other

It is worthwhile to mention that ExxonMobil already has the experience of operations at the deepwater shelf of the Black Sea. Along with Petrom company ExxonMobil conducts exploration works at Neptun block on the Romanian part of the Black Sea shelf. Neptun block  9 900 square kilometers, and the sea depth ranging from 50 to 1700 meters. At the end of 2011 the drilling of the first well Domino-1 has been started at this block, and the well . Last year the large scale 3D mapping at the area of 6 000 square kilometers and the drilling platform Ocean Endeavor for the Domino-2 was contracted. Based on the the natural gas reserves at this block could reach 42-84 billion cubic meters. Noteworthy that Neptun block and Skifska Area are located next to each other and actually are the parts of the same geological formation.

During the announcement of the results of the tender on Skifska Area the Minister on Energy and Coal Industry to sign the PSA till the end of 2012. However, neither in 2012 nor in 2013 the agreement was not signed. In particular, the government announced in media about the intention to sign the agreement firstly in , than in , after that in 2013 and finally in January 2014. Yet each time the signing of the agreement was further postponed. At first, the parties debated the issue of PSA’s governing law and the place of disputes’ resolution. Finally, in January 2014 Ukraine was hit by the political crisis followed with the Ukrainian government resignation. In the result, it seemed that international oil and gas companies do not hurry to extend cooperation with Ukraine.

At the same time, the legislation of Ukraine predetermines certain period for PSAs’ signing. According to article 7 of the Law of Ukraine “s”, a PSA should be concluded not later than during 12 months from the date of the tender results’ publication with the possibility of prolonging the term for another six months based on the written request of the investor. Thus, the legislation foresees one and half year period for PSAs’ signing, which, in terms of Skifska PSA, is likely to end today – the 13 of February, 2014. However, in September 2013 in New-York Eduard Stavytckyi and the honored representatives of ExxonMobil, Royal Dutch Shell as well as OMV Petrom signed an Agreement on Concluding the Hydrocarbons Products Sharing Agreement for Skifska Area. “In line with the acting law we have made the first step in the process of signing the product sharing agreement”, – after the signing ceremony. Neither the text of this “agreement on signing the agreement”, nor any detailed comments on its content and related legal outcomes were disclosed by the parties. It is likely, though, that the signing of this agreement could be treated as a formal compliance with the legislative requirements, allowing extending the negotiation period over the final text of Skifska Area PSA.

The PSA negotiations, however, could not last forever. Ukraine is naturally interested in the rise of the natural gas extraction at its territory, while the international companies led by ExxonMobil have technologies and economic interest for the execution of this project. From the other side, void PSA threatens to postpone for indefinite time the likely extraction of additional several billions of cubic meters of natural gas per annum in Ukraine favouring the continuation of monopolistic gas supply to Ukrainian market. Thus, the conflict of these opposite interests would define the place for the comma in the title of this article.