The United States of America have enough potential to boost their natural gas exports. The necessary liquefaction infrastructure is being constructed while related licensing and approval procedures may well be simplified through trade partnership agreements’ application, including the EU-US case. Under named scenario the European Union has all the chances to weaken greatly its gas dependence from the Russian Federation in the middle term, following Russia’s recent arrogant military and political activities around Crimea.

US President Obama during his visit to Europe stated that US is ready to supply to the world market as much natural gas as Europe consumes.

How, though, the specifics of US gas exports to EU may look like regarding both, the possible volumes and timelines?

Due to shale gas boom the US became the largest natural gas producer worldwide and achieved the significant reduction of natural gas price at internal market. 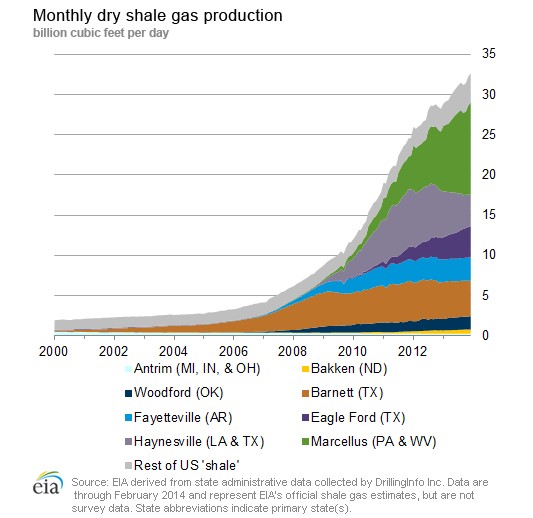 As a result, the US energy companies seek the ways to external markets and develop natural gas liquefaction infrastructure.

At the same time, the LNG exports amounted only a small share of the overall gas exports equaling to 2 billion cubic meters per year. The increase of LNG exports demands significant investment in the construction, modernization, and/or expansion of gas terminals and thus needs time and certain warranties from potential buyers. On the other hand, the growth of LNG exports will open the possibility to benefit from much higher gas prices in Asia and EU, comparing to those at US internal market, strengthening, at the same time, the US geopolitical cooperation with its partners worldwide.

According to the last forecast of US Energy Information Agency, the country will become net exporter of liquefied natural gas in 2016. It is expected that the U.S. exports of LNG from new liquefaction capacities may well surpass 2 Tcf (56.6 billion cubic meters) by 2020 and increase to 3.5 Tcf (99.1 billion cubic meters) in 2029.

Thus, US LNG export will increase tenfold during the coming 15 years.

Thus, current demand for LNG could be, in principle, covered by existing liquefaction capacities. Taking into account new projects in construction stage, such trend could remain at least till 2020.

It is, therefore, reasonable to expect that the US gas exporting companies would seek new markets to sell, in fact, huge volumes of LNG already in middle term. Such trend may match with the interests of many EU and East Europe countries to have the access to non Russian natural gas supplies.

It is worthwhile to mention that the current licensing procedures for the US natural gas exports are much easier if the gas is exported to the countries having valid free trade agreements with the US. For now, there are , including those with such countries as Canada, Mexico, Australia, South Korea, Singapore, etc. It is also true, though, that the licensing process to export LNG to non-FTA countries is complicated and time consuming. Hence, the potential impact of LNG exported from US on European market will depend on the approval of new licenses for LNG export to non-FTA countries and also on signing of new free trade agreements.

On 24 of March, the US Department of Energy for the construction of LNG plant for gas exports to non-FTA countries. The total capacity of all seven plants is about 105 billion cubic meters of natural gas per year. The approvals for additional 24 projects of a kind are pending at the review of the Department of Energy. The overall timeline of LNG project development could be 5-7 years, out of which several years are spent on the approval process.

For that reason during the EU-US summit President Obama linked the plans for growing natural gas supply to Europe with the concluding of transatlantic trade and investment partnership agreement  with European Union. Concluding transatlantic trade and investment partnership agreement between US and EU will foster the access of US shale gas to European market. In case of signing such agreement, already in 3-5 years term the significant volumes of natural gas could be supplied from US to Europe. If there is no such agreement, the whole process could be delayed for several more years.

In any case, US shale gas has all the chances to reach European market in mid-term perspective. Although the volumes of such supplies will not be enough to substitute all Russian gas exports to European markets, the natural gas of the US origin would allow to downplay the current monopolistic gas supplies at some European countries, including Ukraine.